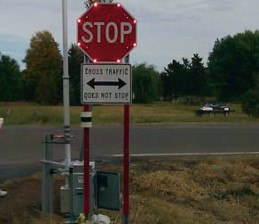 A 2014 study by the Minnesota Local Road Research Board found a 42% decrease in right-angle crashes after LED enhanced stop signs were installed.

To improve safety at stop sign-controlled intersections, Minnesota cities and counties have installed stop signs enhanced with flashing light-emitting diodes at selected intersections. The hope is that if stop signs are made more noticeable, the frequency of right-angle crashes will be reduced. In addition to the statistical study, investigators conducted a field study to compare how drivers behave at flashing LED stop signs and at traditional stop signs. A portable, pole-mounted video recorder provided by the Minnesota Traffic Observatory was used to collect 64 hours of data at the intersection of Trunk Highway 95 and County State-Aid Highway 9 in Chisago County. Half of this video was from June and July 2012, before installation of a flashing LED stop sign, and half was from September and November, after sign installation.

This has proven to be accurate: at intersections made more visible with LEDs, drivers were significantly more likely to stop when opposing traffic was present. The direct comparison was 10.6 clear stops for every clear nonstop after installation compared with 4.2 stops for every nonstop before installation. When no opposing traffic was present, however, there was no change in behavior after installing the flashing LED sign; approximately four drivers clearly did not stop for every driver who did stop.

While no further research is planned, MnDOT will continue to monitor locations where flashing LED stop signs have been installed to collect more data about their impact on safety. There may also be opportunities to evaluate other forms of illuminated signs and their impacts on right-angle crashes.

Our mission at Availed Technologies is to produce solar flashing beacons and LED enhanced signs that are exceptionally reliable and effective.

With over 25 years combined experience in the Solar LED Industry we have the knowledge and skill set to design and deliver products that perform year after year. We understand that providing a best-in-class product demands the support of industry-leading partners, and we are very proud to be represented by some of the most trusted companies in the business.